This framed image is from the Government Printing Office (GPO).  It shows the Returned Soldiers’ Club first annual outing at Yarra Bay on 25th September 1920.  This image complements another photo board from A4126 which includes forty images of employees of the GPO who served in WWI.  The centre photo panel shows 95 government employees who were participating in a day of remembrance for their comrades.  The employees are listed beneath the photo.  Two details flank the photo.  On the left hand side is the Returned Sailors’ Soldiers’ and Airmens Imperial League of Australia, New South Wales Branch Charter of Membership.  This Charter certifies the GPO as a sub branch of the RSS & AILA and is dated 1 July 1928.  On the right hand side is the RSS & AILA Oath of Allegiance, which includes:

I affirm my loyalty to Australia and the King and Empire, that I will secure patriotic service in the interests of both, and I am prepared to take the Oath of Allegiance. 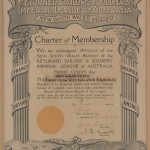 Charter of Membership detail from left hand side of GPO Returned Soldiers’ Club, 1920. From A4126. 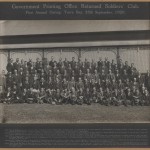 Photo detail with names from centre of GPO Returned Soldiers’ Club, 1920. From A4126. 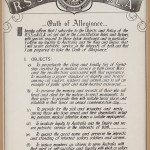 Oath of Allegiance detail from right hand side of GPO First Annual Outing, 1920. From A4126.