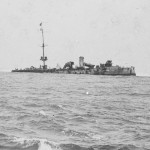 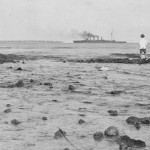 When war broke out it was important for both Great Britain and Australia to keep the trade routes between the two countries operating. On 27 August 1914 this imperative was relayed to the Premier Holman via a cipher telegram sent to Prime Minister Cook. The telegram recommended that “British trade should be allowed to continue with as little interruption as possible” and harbour lights should only be dimmed if an attack was imminent.(1)

One of the biggest threats to British trade routes in the Indian Ocean was the SMS Emden, a Dresden light cruiser that during the first five months of the war, had captured or sunk 21 vessels. HMAS Sydney was escorting the first convoy of Australian and New Zealand troops to Egypt when it received news of a strange vessel close by on Direction Island (Pulau Tikus) in the Cocos (Keeling) Islands. On 9 November the Sydney came across the Emden, while a German landing party was ashore to destroy the telegraph station. A short battle ensued with the Sydney overpowering the Emden, which eventually ran aground and sunk on North Keeling Island. Several salvage operations were carried out on the wreck of the Emden, and three of the four guns ended up in Australia.(2)

The Government Printing Office (GPO) took a series of photos that have survived as glass plate negatives in the State archives. The photos are of what appears to be selected pages from an album that the Australian War Memorial states was compiled by Charles William Burnett, of the Eastern Extension Telegraph Company who was stationed on the Cocos Islands at the time of attack.(3) The AWM has attributed the photos in this album to J S Triggs and R Cardwell, which were taken on 9-10 December 1914 when a landing party from the SMS Emden came ashore and destroyed the telegraph station on Direction Island, in the Cocos (Keeling) Islands.  The GPO register records that the negatives were made at a later date, in August 1929.(4)

View the GPO glass negatives of the Sydney and the Emden In 1917 the Commonwealth Government offered one of three Emden guns to the City of Sydney, an offer which was accepted on 20 August 1917.(5) It was decided to display the Emden gun in Hyde Park, where it was mounted on stone in a railed enclosure.

The monument was unveiled by the Sydney Lord Mayor, Alderman RD Meagher, on 21 December 1917. Although Premier Holman was invited to the unveiling, and accepted the invitation, it appears only Mrs and Miss Holman attended. Alderman Meagher spoke to a large crowd at the unveiling, including some crew members of the HMAS Sydney:

To unveil a trophy of war – won by the youngest navy in the world under circumstances which bring a thrill of pride and gratification to all true Australians and faithful sons of Empire. (6)

The Emden Gun Memorial is situated in the south-east corner of Hyde Park facing Whitlam Square. 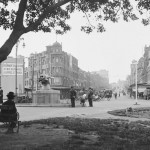 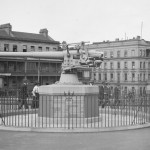 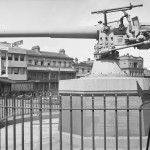