On 14 February 1916 thousands of soldiers from the Liverpool military camp took strike action. They marched and rioted through the streets of Liverpool before catching trains into Sydney and marching down George Street. The riot ended with a skirmish at Central Railway Station where one soldier was shot dead and six others were injured. The riot, seen by the military authorities as a mutiny, took many Sydney-siders by surprise but it can be seen as the culmination of ongoing problems that existed at the Liverpool military camp.

Liverpool military camp
The Liverpool area had been used as a training camp for the Australian military forces from as early as 1903.  After the outbreak of war, Liverpool became a major training centre for New South Wales recruits. (1)  A Light Horse training camp was established at Casula, just 1.5 km away from the Liverpool camp and German internees were also held close by at the Holdsworthy Internment Camp. In July 1915 a petition from the Liverpool Municipal Council asked for more police officers for the township and stated that there were about 6,000 men encamped at Liverpool. (2)  A police report from Sergeant Coates, stationed at Liverpool, indicated that by September 1915, there was a large increase of soldiers to nearly 17,000 living at the camp and on Sundays, there could be up to 15,000 extra people as families visited the camp. (3) Liverpool military camp was beset with a number of problems for the military authorities. By 1915, as large numbers of recruits flowed into Liverpool, the soldiers were housed close together in tents. The camp quickly became too large and overcrowded. The soldiers bemoaned the lack of a wet canteen (to serve alcohol), the difficulty of catching trains from Liverpool and in obtaining leave passes. (4)  At Casula, soldiers complained about excessive discipline and overwork. (5) Two small riots broke out as protests about the conditions of the camp. On 26 November 1915 soldiers clashed with sentries when they tried to leave camp without leave passes. Three days later, on 29 November, there was more trouble in the township of Liverpool when 1000 soldiers took over several hotels. [Fig. 1]  When Police Inspector Musgrave arrived at Liverpool to deal with the crisis, he

found the Commercial Hotel practically in charge of a large number of intoxicated soldiers who were doing just as they pleased. The hotel bar was full and drink was being handed around in an indiscriminate manner …. The main street in the town was thronged with soldiers dancing and swinging beer bottles. (6)

The Railway Hotel had a number of broken windows and several casks of beer were stolen from the Golden Fleece Hotel. The damage from the riot was estimated at £30-40. (7)  After several hours, the police and military authorities eventually convinced the soldiers to return to camp. A Royal Commission was established to investigate the complaints about the camp. State Commandant, Colonel Ramaciotti, visited Liverpool and promised changes for the barracks. He also attempted to address soldiers’ grievances in regard to leave and the purchasing of rail tickets but the situation at the camp continued to be “a time bomb … just waiting to go off”. (8)

On Monday 14 February 1916 a new training syllabus was introduced throughout the Australian Imperial Forces. The main change was an increase in the time recruits spent drilling from 35 hours to 40 ½ hours a week. This was aimed at making the recruits battle-ready for the demands of the Western Front. (9)  The increase in the hours of drilling was the last straw. The first indication of trouble occurred at Casula Camp. At around 8.40am there was disquiet among the soldiers about the extra drill and by 8.55 approximately 2500 soldiers marched out of Casula camp towards the main Liverpool Camp to voice their grievances to Camp Commandant, Colonel Miller, who agreed to review the situation. (10) Early police reports indicated that the march was unsuccessful and as the soldiers were unable to catch the train at Liverpool Station, they dispersed and many of them returned to Casula. (11)  While it appears that some men did return to Casula, others remained and were joined by several thousand more soldiers from the Liverpool camp and this group now marched into the township of Liverpool. [Fig. 2-3] By midday there was rioting at Liverpool. An extra twenty police were sent from the nearby stations of Parramatta, Lidcombe and Auburn but by the time the police arrived, Rafferty’s Hotel and the Commercial Hotel had been looted and the streets were full of drunken soldiers. (12)  These extra police officers were not sufficient to deal with the Liverpool riot which continued until after 5pm when large numbers of police reinforcements arrived. (13) Police reports submitted after the riot estimated that there were about 2500-3000 soldiers involved in the riots at Liverpool, they caused an estimated £1376 worth of damage and three police officers were injured. (14) [Fig. 4] An eyewitness account of the riot at Liverpool survives in a letter to Premier WA Holman from Liverpool resident, Mr A Jones of Junction Street. [Fig.5]  In his letter Jones describes the events of the day:

At about 11.30am (I’m not sure) the doors of the Commonwealth Hotel were thrown open and a large mob of soldiers were allowed in. This was the commencement of loot, wreckage, and drunken revelry, the turning point leading to Sydney excesses and Liverpool riot. The order to open the hotel was [the] crux to the whole days disorder. About 200 soldiers became demoniacs and by the 1.18pm and 4pm entrained for Sydney carrying flasks of spirits and beer with them which they had looted from this hotel. (15)

Many thought the riot had been contained in Liverpool as another police report stated that only 300 soldiers had caught the train from Liverpool to Sydney. (16) [Fig. 6]  In reality, thousands of soldiers caught the train from 1pm onwards for the 30 km trip to the city. (17)  By 2pm the troops were disembarking and in an orderly fashion, lined up in fours, to start marching through the city. The soldiers could be heard to chant “Are we going to drill 40 hours?” with the reply “No”. (18)  By 2.45pm the police had realised their error:

3000 men are now marching down George Street and the Military Authorities say they do not know how they got there. They are marching quietly but are talking of giving some trouble. (19) [Fig. 7]

The soldiers marched down George Street to Circular Quay, then up Pitt St towards Central Railway Station. They carried a banner with the message “We are on strike; we won’t be drilled 40 hours a week”. (20)  By 3.30pm the soldiers had split into two main groups, one headed for Grace Bros. department store on George Street West then up Haymarket, Campbell and Goulburn Streets toward Central Railway Station. [Fig. 8]  The other group marched up Oxford St towards the Agricultural Showgrounds. 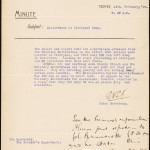 By 5pm a combined civil and military police picket was established at various points throughout the City, including Central Railway Station. Some 500 extra police had been drafted from suburban police stations and the military authorities had offered up to 1500 extra men. (21) Premier Holman was kept up to date with the riot and called an urgent cabinet meeting to discuss the situation. Cabinet agreed to close hotels in the districts of Sydney Central Business District, Glebe, Newtown, Redfern and Paddington. [Fig. 9]  State motor cars were also made available to Police to enable them to move quickly around the city. (22) 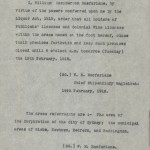 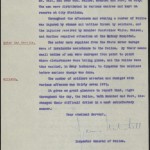 By the time the hotels were shut at 8pm, the city streets were thronged with soldiers and civilians milling around. There was fighting in the streets, shops had their windows broken, soldiers stopped traffic, blocked roads and overturned fruit barrows at the Queen Victoria Building . About 10 shops sustained damage, including Grace Bros, Kleisdorf’s tobacco shop on Hunter St and the German Club on Phillip St. Soldiers were seen roaming around the streets in packs and clambering on trams. (23) From 6pm onwards an armed guard had been on duty at Central Railway Station. At 8.45pm Major Logan, stationed at the Agricultural Showgrounds in Sydney, joined the picket with 150 armed soldiers. (24) By 9.30pm all civilians were cleared off the assembly platform and at 10.30pm a group of about 800 soldiers had gathered at the eastern platform. At about 10.45pm the picket was attacked at the eastern entrance of the station by the soldiers. Bottles and stones were thrown at the guard and a fire hose was turned on them by the soldiers as well. In the ensuing chaos a revolver was fired, supposedly by Trooper Ernest William Keefe, at which point the armed guard fired about 50 shots into the mob of soldiers. (25) The soldiers dispersed, leaving Trooper Keefe of the Sixth Australian Light Horse dead on the platform and six other soldiers injured.

Thousands of soldiers made their way back to the Liverpool camp during the evening of 14 February and the next morning for 11am roll call.  Police reports for the riot state that 37 soldiers were arrested in Sydney, with 17 charged with riotous behaviour. [Fig. 10]  In the weeks that followed many faced both local court and the military courts on charges of mutiny.  In the margin of the Police report on the riot [Fig. 11-15] there is a handwritten note from Chief Secretary George Black in which he congratulates “the officers and men of the police force on their bravery and tact, their fine discipline and their good humour.” (26)

Coronial Inquest
On 29 February 1916 February 1916 a coronial inquest was held into Trooper Ernest William Keefe’s death during the riot. Keefe, aged 26, was identified by several witnesses as one of the soldiers using the fire hose on the military picket at Central Railway Station. (27)  Many of the witnesses who gave evidence at the inquest stated that the soldiers were a threatening mob and a wild fight developed on the platform. Keefe’s mother also testified that he owned a revolver. Although several shots were fired from the riot crowd at the eastern archway, no-one saw Keefe do this. The Coroner ruled that the head wound was “justifiably inflicted upon him [Keefe] by a military picket, then in lawful execution of their duty in maintaining the public peace and suppressing a riot of mutinous soldiers and civilians.” (28)  No coronial or probate records could be located in State records for Ernest Keefe.

Changes at Liverpool military camp
Within a few weeks of the riot a number of changes were made to the running of Liverpool military camp. The Casula Camp was closed and the Light Horse Camp was moved to Menangle. (29)  The number of soldiers who were being trained at the camp was drastically reduced as well. On 25 February the State Commandant announced that from 9 March 1916 Liverpool would only house 6000 soldiers and the overflow would be sent to country camps or to the front line. (30)  Sydney recruits would also be sent country camps rather than staying close to home.(31)

(1) Other training camps were also established in and around Sydney at Menangle (southwestern Sydney), the Warren (Marrickville) for field artillery, Randwick and the Agricultural Showgrounds for engineers. Country camps were established at Newcastle, Bathurst, Maitland and Goulburn. (Reinecke, Scott, p.207; NAA: A471, 1143 Madden and 14 others)

(10) In one of the court martials following the riot Captain Smith and Acting Sergeant Major Tanner gave evidence that about 2500 men out of the 5600 stationed at Casula marched out of camp at 9am. By the afternoon there were only about 2500 men left at Casula, meaning over half the soldiers had left. (NAA: A471, 1143 Madden and 14 others, p.8 & 75).