Throughout 1916 the Commonwealth Government of Australia struggled to maintain levels of recruitment needed to meet the ongoing demands of fighting on the Western Front in Europe. Prime Minister WM Hughes favoured compulsory military service and decided to put the issue of conscription to the Australian people in a plebiscite (non-binding referendum) to be held on 28 October 1916. (1) 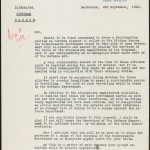 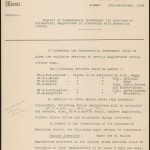 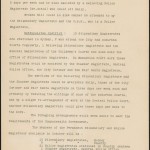 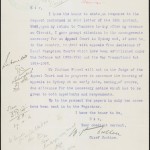 On 8 September 1916 George F Pearce, acting on behalf of the Prime Minister, sent a circular to Premier Holman requesting his assistance to establish military exemption courts in New South Wales. [Fig. 1] The courts were to be established under Part IV of the Defence Act 1903 if a proclamation calling up single men for military service became necessary. (2)  Pearce asked that the machinery of the New South Wales courts, such as stipendiary and police magistrates, conduct the exemption courts alongside their normal duties. [Fig. 2-3]  It was thought that this would be necessary for the month of October 1916 only. A judge was also requested to run an Exemption Appeals Court. (3)

An Attorney-General’s minute, dated 13 September 1916, laid out the response of David Hall, the Attorney-General, to Pearce’s request. For the month of October 1916, 51 magistrates, including 15 stipendiary and 31 police magistrates, would be available to run the exemption courts. (4)  On 23 October Chief Justice Cullen [Fig. 4] informed the Attorney-General that Justice Philip Whistler Street would act as the judge in the Military Exemption Appeal Court in Sydney. (5) Prime Minister Hughes, anticipating the plebiscite would receive a ‘yes’ vote, issued a proclamation [Fig. 5] on 29 September 1916 calling up “all male inhabitants of Australia” into the service of the “Citizen Forces”. (6)  Men aged “twenty-one and upwards but under the age of Thirty-five years, and unmarried or widowers without children” were called to enlist for military service within the Commonwealth from 2 October 1916. (7)  This Citizen Force military service would enable men to be trained and sent overseas more quickly once the plebiscite was successful. (8)

One court was to operate in each military sub-district and deal with the “granting, renewal, variation or withdrawal of certificates of exemption”. (11)  Applications for exemption were to be made to the military registrar in each of the sub-districts. While the military had the right, as laid out in War Service Regulation 17:1, to appear before the exemption court, individual men could not be represented by counsel or paid agents. (12)  Each case had the right of appeal to the District Appeal Court in NSW and any further appeals were to go to the High Court of Australia. 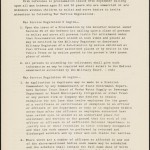 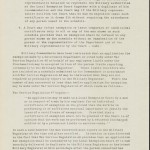 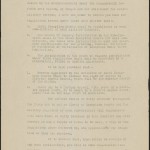 One contentious concern that arose from the exemption court was the use of fingerprinting in the issuing of conditional or temporary certificates of exemption. [Fig. 7] Fingerprinting was deemed necessary to avoid fraudulent use of the certificates by people other than the named man. The penalty for the misuse of an exemption certificate was set at six months in prison. (13)  At this time in Australia, fingerprinting was only used in connection with criminals and this measure was deemed heavy handed by many critics of compulsory military service. (14)

In the campaign for compulsory military service, the military exemption courts may have proved a thorn in the side for Hughes.  The courts came into operation just a few weeks before the plebiscite vote and provided for many, an insight into what conscription might be like.  For many rural communities, who had been promised protected labour by Hughes under compulsory military service, the military exemption courts demonstrated the reality of an outside power deciding the fate of families and rural
life. (15)