On 2 October 1916 a Commonwealth proclamation called up all single able-bodied men between the ages of 21 and 35 for military service in Australia. In the wake of the proclamation, military exemption courts were established throughout the New South Wales and the rest of Australia.

Register of applications for exemption 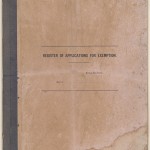 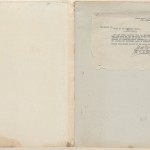 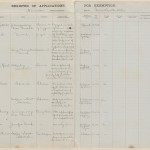 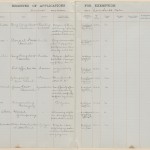 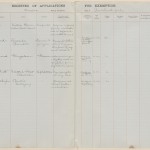 The Bowral Local Military Exemption Court operated in the Werriwa Military District.  In total, 138 men reported to enlist, of which 86 applied for an exemption.(1)  Between 20 and 21 October 1916 the court received 23 applications for exemption [Fig. 1-5].  The applications contain personal details, sometimes accompanied by personal letters or statutory declarations. The copies of the final certificate also include two fingerprints from each applicant. On 6 November 1916 the applicants were notified of the sitting date of the court, which was Wednesday 15th November at 2pm. This appears to be the only Military Exemption Court held at Bowral as the court proceedings were abandoned on 22 November 1916.(2) The cases were heard before a police magistrate, William Smith Arnott, and a military representative. 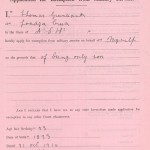 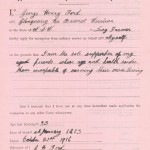 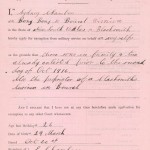 Of the 23 applications, the majority (14 out of 23 or 60%) were local farmers, graziers or labourers. The most common reason for applying for an exemption included being an only son or the sole support for the family. Thomas Greenbank, a farmer from Joadja Creek, applied for and was granted a conditional exemption on the grounds that he was an only son [Fig. 6].  George Henry Ford, a dairy farmer from Glenquarry, was the sole support for his aged parents and was granted a conditional exemption. Another common reason for applying for an exemption was that the person concerned was the only son in the family not already serving with the Australian Imperial Force (AIF) overseas [Fig. 7].  Sydney Chambers, a blacksmith from Bong Bong, was one of three sons, two of whom had already enlisted. Chambers was granted a temporary exemption [Fig. 8]. 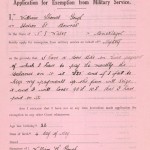 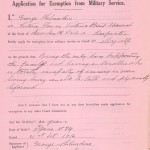 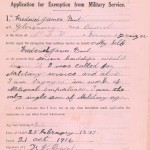 Most of the men (16 in total) were granted conditional exemptions and another four were granted temporary exemptions. One case, William Thomas Gough was withdrawn [Fig. 9].  Gough was a bricklayer from Bowral and applied from an exemption because he had a motorbike on time payment and he didn’t want to lose the money he had already paid off on the motorbike. George Shelmerdine, a carpenter from Bowral, applied on the grounds that he was the only son supporting his family as he had another brother who was incapable of talking or earning a living [Fig. 10].  Shelmerdine’s case was referred to a later court date so that further investigations of his claims could be conducted. Only one case, that of Frederick James Bunt, was refused outright [Fig. 11]. Bunt was a farmer from Glenquarry who applied for an exemption on the grounds that he was engaged in work of national importance and the only son of military age in his family. Bunt provided no further evidence of this work of national importance.

It appears that only one of the men before the Bowral Local Military Exemption Court, Wilfred Ernest Schofield, from Kangaloon, went onto to serve in the AIF. Schofield enlisted on 11 June 1917 and served in the 3rd Battalion. He was killed in action on 9 August 1918 at Harbonnieres in France.(3)

The following names are listed in the order that they appear in NRS 20173 Register of applications for exemption.  The records vary, with between one and eight examples for each man, whose names are included below.  NRS 20176 Certificates of exemption from military service can also be viewed.