The running of the exemption courts

Applications for an exemption from military service generally fell into two classes. The first class or group of people who could apply for an exemption were covered under Section 61 of the Defence Act 1903. (1) This group included:

The local exemption court had no discretion with the applications in this specified class and had to approve the exemption. The list was expanded to include those employed in the police or gaol service, doctors and nurses in public health care, lighthouse keepers, persons who were not substantially of European descent or people employed in protected industries. (2)

On 25 October 1915 the Industries Exemption Advisory Committee issued recommendations on protected industries. People working in these industries, depending on their work role, could apply for absolute exemptions or temporary exemptions which would be regularly reviewed. The protected industries included of customs and shipping clerks, crews of shipping vessels, dental students, agricultural workers and sheep shearers and workers in copper and lead mines, refineries, iron and steel rolling mills.  Other protected industries included chemical manufacturers, engineering and boiler making, iron, steel and brass foundries, rope and cordage manufacturers and sail, tent and tarpaulin makers. (3)

Government departments and private firms could also apply for exemptions for their employees. Private firms not already covered as protected industries, could apply for up to 12 exemptions for work of national importance being performed or specialist work that could not be performed by another person or a returned or discharged soldier. (4)

Early in October 1916 Premier Holman held a meeting with representatives of the New South Wales Public Service to decide which sectors of the public service would be exempt from the call up. It was decided that the Railways, Police, Justice Department (Courts of Petty Sessions [Fig. 1]), Public Instruction Department and the Sydney Harbour Trust had special need for exemptions. Applications could be made in bulk for each department but were limited to as few men as necessary. (5) 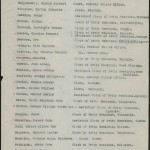 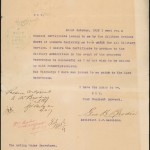 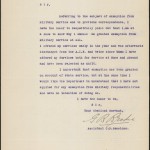 The case of George Beresford Brodie, an assistant clerk in the Court of Petty Sessions at Wagga Wagga, reveals how feelings about conscription were running high. [Fig. 2-3] It appears the Justice Department included Brodie on a list of public servants they wanted an exemption for in October 1916. (6)  Brodie, feeling aggrieved that he was on the exemption list, wrote to the Under Secretary in the Department of Attorney General and Justice to explain that he had not personally requested an exemption. In fact Brodie had already offered his service to the Australian Imperial Force and been rejected as being unfit. (7)

The second class or group who could apply for exemptions fell under Division 3 of the War Service Regulations. This group could apply for an exemption on grounds of expediency or domestic financial obligations. It included men who were the “sole remaining son or one of the remaining sons of a family of whose sons one-half at least have enlisted” or “sole support of aged parents, or widowed mother, or orphan brothers and sisters under the age of sixteen
years”. (8)  The court had discretionary powers, based on the evidence provided, including calling witnesses and demanding statutory declarations to refuse or grant an exemption application.

One of the problems of the military exemption court was that many of the legal terms that the judges were meant to make ruling on were not defined. These terms included “employed in the national interest”, “exceptional domestic financial obligations” and “only son”. (9)  This led to different interpretations by the various judges. 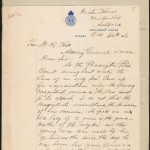 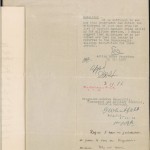 One case that highlighted this problem was that of JRW Bellhouse, of Woollahra, Sydney. [Fig. 4-7]  Bellhouse had applied for an exemption as an only son in October 1916 and his case was heard in the Paddington Police Court. Bellhouse’s exemption was refused by the judge, even though his 78 year old grandmother testified that Bellhouse’s parents were both dead and he was the only issue from the marriage. Attention was brought to the case when William Fleming Latimer, the Member for Woollahra, wrote to the NSW Attorney General asking for the magistrate’s ‘inexplicable’ decision to be reviewed. His request was forwarded to the Commonwealth Military authorities. (10)

The running of the exemption courts 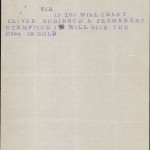 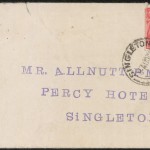 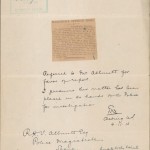 A curious case of bribery arose in Singleton in November 1916. Police Magistrate Robert Henry Venn Allnutt was sitting in the Military Exemption Court in Singleton when he received an anonymous letter offering him a bribe of 100 pounds in gold if he would grant an exemption to Oliver Robinson. [Fig. 8-9]   Allnutt revealed the bribery attempt in court on Thursday 2 November, stating that the offer was an “attempt to divert justice and a personal affront to himself”. (13)  The police investigated the bribery attempt, clearing both Oliver and his father, H S Robinson. It turned out there had been several other bribery letters in Singleton in the previous few months. [Fig 1-12] 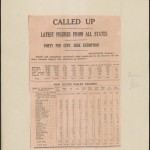 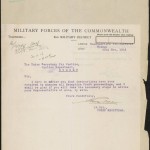 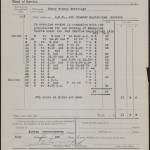 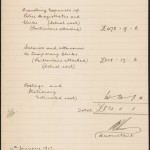 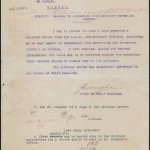 On 23 November 1916 Prime Minister Hughes announced that, in the wake of the defeat of the conscription plebiscite, the military exemption courts would close. (14)[Fig. 14]  In January 1917 the NSW Justice Department issued an invoice for £850 to the Commonwealth Government [Fig. 16], to cover the cost of running the exemption courts in the state. (15) An individual statement from Henry Sydney Beveridge, a petty sessions clerk at Burwood Court, itemised the work he had undertaken in the military exemption court from 6 to 31 October 1916. [Fig. 15] He worked just over 57 hours at a cost of 3 shillings and 11 pence per hour, with the total cost of his services being £11 4 shillings and 2 pence. (16)

Very few records of the local military exemption courts in New South Wales have survived. On 29 September 1920 a circular was sent to all clerks of Petty Sessions throughout NSW asking them to hand over records of the exemption courts to military authorities. [Fig. 17]  Some individual applications made by men employed in the public service have survived in the papers of the Chief Secretary and in a series of records from the Bowral Local Military Exemption Court.