The Waratahs, Wallabies and Kangaroos marches; Result and influence

In late 1915, and early 1916, a particular response to the call for more volunteers, was conceived of largely by members of the New South Wales public. Eight recruitment, or ‘snowball’, marches as they were popularly known, travelled from major rural centres through countless townships, towards Sydney – stirring up patriotic, and enthusiastic support as they went. Information about the organisation of some of these marches has been identified in NSW State Archives.

Commencing in the South Coast town of Nowra, the ‘Waratahs’ snowball march started for Sydney on 30 November 1915.[1] Beginning with 50 volunteers,[2] the march travelled along the coast, primarily via the Princes Highway.[3] After a final night’s camping at Kogarah, the march including 120 volunteers,[4] arrived on a rainy 17 December 1915 in Sydney, where they were addressed by Premier Holman in Macquarie Street [Fig. 1].[5] A luncheon was then held for the Waratahs and their managing committee [Fig. 2], at Sargent’s Café at 55 Market Street, Sydney (next-door to the State Theatre). The photo taken by the Government Printing Office of the managing committee [Fig. 3], includes march leaders Captain Ernest Blow (middle row, second from left), and Lieut. ‘Sam’ Edward Spencer Hordern, seated in the front row, in the middle. Also captured is NSW Member of the Legislative Assembly for Allowrie, Mark Fairlies Morton (middle row, far left), and Organising Secretary for the State Recruiting Committee, James Howard Catts (front row, far left). Member of the House of Representatives, George Mason Burns, who presented both Capt Blow and Lt Hordern with gold medals at the luncheon,[6] is seated in the middle row, second from right. 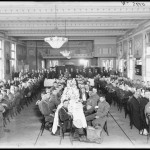 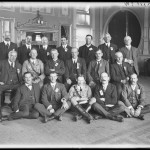 In mid-November 1915, the Walgett Recruiting Association had written to NSW Chief Secretary/Minister for Public Health, George Muir Black in the lead-up to a recruitment march being organised in north-western NSW. Black arranged for the military authorities to cover the cost of a car hired to transport an AAMC medical officer to the remote towns of Angledool, Goodooga, and Lightning Ridge, to examine twenty-five volunteers [Figs. 4-5]; all of whom passed. These men were to join those from Comborah and march from Walgett unofficially under the name of ‘The Namoi Never Surrenders’. [7]  The group left Walgett on 1 December 1915,[8] pausing for recruitment meetings at Burren Junction and Wee Waa, and marching on to Narrabri to join the men of the ‘North-West Route March’.[9] The two groups combined to march from Narrabri on 8 December as the ‘Wallabies’.[10] The march arrived in Newcastle on 8 January 1916, where it was halted by the military authorities to use the men in forming the local 34th Infantry Battalion.[11] 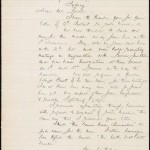 Another march commencing in late 1915, was organised by the Wagga Wagga War Service Committee in cooperation with that of Yass, and travelled from Wagga Wagga to Sydney – the longest of all marches at 350 miles.[12] Premier Holman had intended to be present as the march of the ‘Kangaroos’ passed through his own electorate of Cootamundra [Fig. 6],[13] however he was subsequently unable attend.[14] There was an unsuccessful attempt by the military authorities to stop this procession,[15] followed by an itinerary sent from the State Recruiting Committee designed to collect further recruits in Sydney suburbs en route. The Kangaroos wished to preserve the ‘country’ element of the march, and so refused any volunteers beyond Campbelltown.[16] On 7 January 1916 the march now almost 230 volunteers strong [17] reached Sydney via Parramatta Road [Fig. 7].[18] The Kangaroos were addressed outside the Mitchell Library by NSW Treasurer, Henry Clement Hoyle, and NSW Chief Secretary, George Black [Fig. 8], after which a welcoming luncheon was held at Sergeant’s Café in Market Street [Fig. 9] similar to that which had been held for the Waratahs before them. 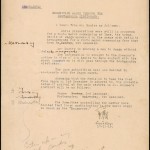 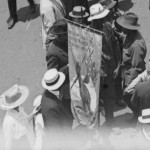 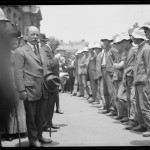 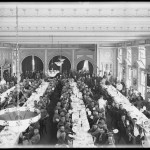 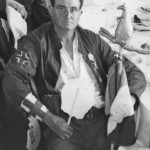 Despite great enthusiasm in the communities through which the snowball recruitment marches passed a modest total of 1,420 men were recruited from these and other similar campaigns arranged throughout NSW, between October 1915 and January 1916.[19] However, the flow-on effect of encouraging and inspiring the public in aiding the war effort, was further-reaching.[20]