On display at Central Railway Station 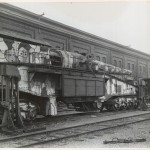 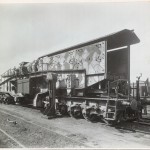 As early as 1915 the New South Wales Government and the Commonwealth Government were aware of the value of war trophies as a means of recognizing the role of the Australian Imperial Force and the valour of particular battalions and individual soldiers.

In February 1915 Premier WA Holman made a failed attempt through the NSW Agent General in London to gain one of over 100 captured guns for the Sydney Technological Museum. (1)  It wasn’t until 1919, after the conclusion of the war that the Amiens railway gun was offered to NSW.

The railway gun was captured at the Battle of Amiens at Harbonnières, near Villers-Bretonneux, on 8 August 1918 by the Victorian based 31st Battalion of the Australian Imperial Force. (2)  The German gun was a 28cm caliber SK L/40 (quick loading canon), that was originally a naval gun and had been converted and mounted onto a railway platform. (3)  The gun was also known as ‘Little Bertha’ or ‘Baby Bertha’. (4)  Although the gun was captured by a Victorian unit, it was offered to NSW due to the standard gauge (1435mm or 4ft 8.5 inches) of the NSW railways whereas Victorian railways operated on broad gauge (1600mm or 5ft 3in). (5)

By September 1919 the original plans for a home for the gun seem to have focused on Belmore Park at the southern end of the Central Business District in Sydney. (6)  The plan though, proved to be too expensive as there were no railway tracks, only tram tracks, for the gun to travel along. The NSW Railway Commissioners suggested an alternative site, the Railway Reserve on the corner of Eddy Avenue and Chalmers Street, right next to the Central Railway Station. A budget of £175 was approved on 10 November 1919 to extend the railway line and embankment at Railway Reserve. (7)  This budget did not cover the costs of landing the gun in Sydney and the ongoing costs of exhibiting the gun but this expense was approved by the Premier in December 1919. (8) 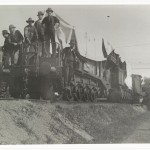 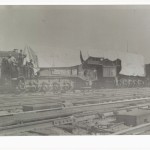 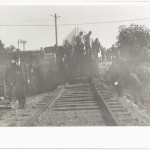 Taking the temporary trestle which was erected over the tramway tracks from Horse Dock, Sydney Station. DIGITAL ID 17420_a014_a014001451


The railway gun was transported from the Chatham Dockyards in England to Australia on the SS Dongara and was initially planned to be unloaded at Newcastle before travelling down to Sydney. That plan had to change as the weight of the gun (185 tons) was considered to be too heavy to cross the original Hawkesbury River Railway
Bridge. (9)  The Commonwealth Government offered the use of a naval floating crane housed at Cockatoo Island in Sydney. (10)  The gun was eventually unloaded via the floating crane at Jones Bay in Darling Harbour. It was then hauled to Eveleigh Workshops where the gun was reassembled. From Eveleigh, the gun went to Station East Box and was then pushed onto specially prepared track work at Eddy Avenue via a ramp. The Amiens Railway Gun, Australia’s largest trophy from World War I, was officially unveiled on 26 March 1920. (11) Some of the soldiers who took part in the capture of the gun were present for this ceremony, along with District Commandant Major-General Lee and representatives of the government and the Railway Commissioners. Ten floodlights surrounded the gun so Sydney-siders could view the exhibit at night. (12)

The exhibit was always a temporary one as the gun belonged to the Commonwealth Government and would eventually be housed at the proposed National War Museum, now the Australian War Memorial. (13)  In November 1922 the exhibit closed and by January 1923 the gun left Central Railway Station for Canberra. The gun barrel is now on display outdoors at the Australian War Memorial in Canberra and the original bogeys and mountings of the gun have been disposed of. 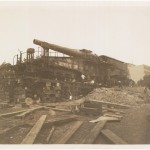 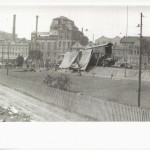 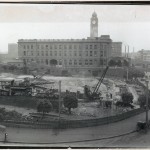 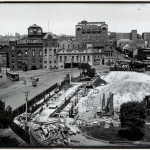