Military service during World War I 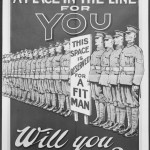 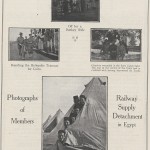 With the declaration of war on 4 August 1914 Australia found itself fighting a war that took place, for the most part, on the other side of the world. The people of New South Wales responded to the new wartime demands in a variety of ways.  Many volunteered to serve their state and the Commonwealth of Australia as soldiers and nurses. The NSW Government turned its vast state wide machinery to supporting the war effort and undertook recruitment campaigns to encourage enlistment.