The assassination of Archduke Franz Ferdinand on 28 June 1914 in Sarajevo brought the world another step closer to the outbreak of war.  Increasing tensions in Europe led to the July Crisis, a month of diplomatic manoeuvrings between the European powers of Austria-Hungary, Germany, Russia, France and Britain.  Australian Prime Minister Joseph Cook, on the election hustings at Horsham on 31 July, stated that

Andrew Fisher, the Leader of the Labor Party (and the next Prime Minister from 17 September 1914), also pledged support for Britain:

“Should the worst happen … Australians will stand beside the mother country to help and defend her to our last man and our last shilling.”  [2] 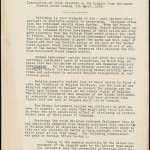 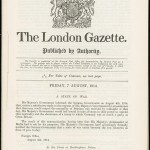 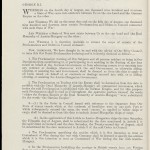 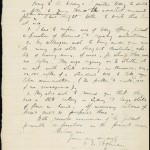 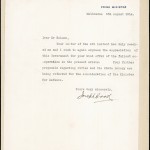 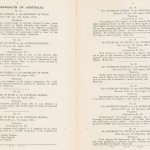 [Fig. 7] Telegram correspondence between Governor General of Australia and Secretary of State in England, starting with PM’s offer of 20,000 men for an expeditionary force. From NRS 12061 [7/5913, pp4-5] 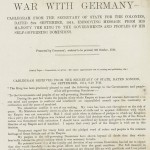 On 4 August 1914, before Australia knew of the outbreak of war, Cook cabled the Secretary of State in London with an offer of an expeditionary force of 20,000 men and pledged the Australian Navy vessels to the British Admiralty (see Telegram No. 13 in Fig. 7).

Britain declared war on Germany on 4 August 1914, and Australia, along with other members of the British Empire, was automatically at war as well  (Fig. 2).   On 12 August 1914 Britain’s declaration of war was extended to include Austria-Hungary (Fig. 3).

With the European situation deteriorating the New South Wales Agent General in London cabled Premier Holman on 5 August 1914 to inform him that a “state of war exists between Great Britain and Germany” (Fig. 1).  Holman had already written to Prime Minister Cook “offering the fullest co-operation” of the NSW government to the Commonwealth and added two suggestions regarding rifles and the NSW State Bakery (Fig. 5).  Cook replied on the following day, 5 August 1914, expressing his appreciation for Holman’s “kind offer of fullest co-operation” (Fig. 6). On 8 September 1914 King George V sent a cablegram message to his self-governing Dominions (Fig.8).  The King acknowledged the grave decision that was taken in declaring war on Germany and her allies, and also recognized the determination and loyalty of the self-governing dominions of Australia, Canada and New Zealand:

Paramount regard for treaty faith and the pledged word of rulers and peoples is the common heritage of Great Britain and of the Empire.  My peoples in the self-governing Dominions have shown beyond all doubt that they whole-heatedly indorse the grave decision which it was necessary to take.  My personal knowledge of the loyalty and devotion of my overseas Dominions has led me to expect that they would cheerfully make the great efforts and bear the great sacrifices. [3]

Australia, fighting alongside Great Britain and other members of the allied forces, was about to enter the Great War.