Red Cross records in the archives Although the New South Wales Division of the Australian Red Cross Society undertook numerous and varied activities throughout the State during World War I, there are comparatively few references to them in the State archives collection. Most of the Red Cross correspondence is clearly labelled with the Red Cross letterhead [Fig. 1] or stamp.  Some correspondence can be located in the Premier’s and Chief Secretary’s Department.

Within the Premier’s Department references to the Red Cross can often be found in NRS 12060 Letters received. The correspondence mostly relates to the first few months of the war in 1914 and into early 1915. For these early months of the war, there are numerous references to Red Cross goods being sent overseas.[Fig. 2]  The generosity of the people of NSW was demonstrated by the fact that over £55,000 worth of goods, including motor lorries, clothing, blankets and foodstuffs were shipped out by the end of January 1915. [Fig. 3] (1)  A summary list from 12 January 1915 includes a breakdown of where goods were sent, including supplies to the Australian Naval and Expeditionary Force, No. 2 General Hospital, the British Red Cross Society in London and comforts for enlisted nurses.

Motor lorries and ambulances were also donated. For example, the Lloyd Jones family donated an ambulance which was to be inscribed “Lloyd Jones Family, Australian Red Cross, New South Wales Division”. (2)  The NSW Division also undertook to equip and maintain three hospital huts at the Netley Military Hospital [Fig. 4], near Southampton in England, using the money raised by the NSW Railways and Tramways’ Officers War Fund. (3) 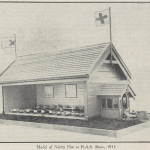 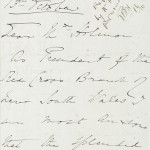 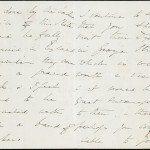 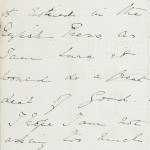 A letter to the Premier from Lady Edeline Strickland, dated 13 October 1914, shows a concern for the work of the Australian Red Cross Society to be recognised and acknowledged in England. [Fig. 5-7] In her letter, Lady Edeline states:

I am most anxious that the splendid work which is being done by the ladies & girls of this state should be fully recognised in England. I consider they are doing a grand work and I feel proud to be associated with such a band of workers. (4)

Premier Holman arranged for the NSW Agent General in London to oversee the delivery of shipments from the NSW Division and organise press releases for the British Press. Holman also agreed that the State government would cover the costs of telegrams to be sent to and from London on behalf of the Red Cross. By 5 February 1915 the cost had amounted to £52. (5)

There are many references to the Red Cross and fundraising activities in NRS 905 Main series of letters received and NRS 906 Special bundles. Permission to hold fundraising events was granted by the Chief Secretary and over the course of the war there were many community groups and associations who held a variety of events from fetes to concerts and dances. The Sutton Forest Branch of the Red Cross Society applied and was granted permission to the Chief Secretary to hold a dance in the Jersey Hall on 11 February 1916. [Fig. 8] (6)  Patriotic societies and comforts funds undertaking fundraising events had to return audited accounts to the Chief Secretary as attempts were made to keep track of all the money that was being donated. (7) 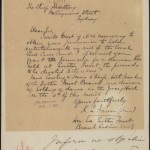 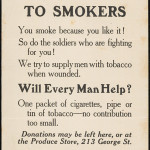 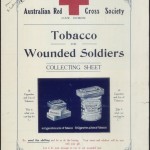 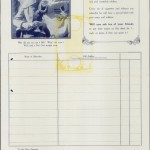 One interesting aspect of Red Cross fundraising was the collection and distribution of cigarettes and tobacco. A poster from 1914 encouraged every man to donate “one packet of cigarettes, pipe or tin of tobacco – no contribution too small”. [Fig. 9](8)  A Red Cross collecting sheet [Fig. 10-12] from 1916 states:

The Need is Greater Than Ever now that there are so many sick and wounded to help and comfort, and we all know how much the poor boys appreciate their smoke. (9)

Other organisations, like the Southern Cross Tobacco Fund operated by the Over-Seas Club, also collected donations of cigarettes and tobacco for distribution among the troops.  Included in one of their flyers is a sketch of soldiers from all over the Commonwealth enjoying a smoke together.[Fig. 13]  By the end of the war the Australian Red Cross Society had sent to Australian Imperial Force troops in the Western Front over 10 million cigarettes, 6839 kg of tobacco and over 57,000 pipes. (10)